Living in Los Angeles is getting worse and worse 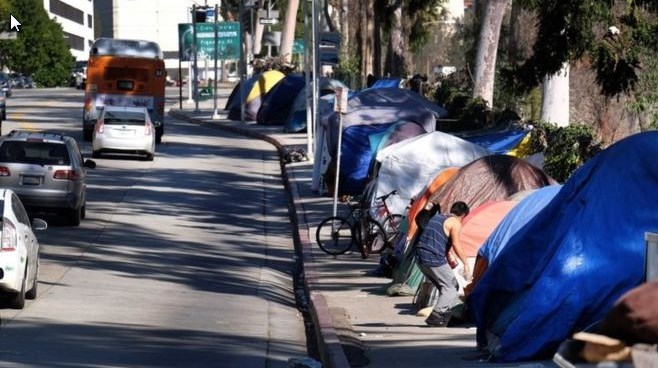 Forget about Baltimore. If Baltimore was a toilet Los Angeles would be a 500-acre landfill. LA can truly claim to the accolade of being a king of the worst cities. There are now an estimated 60,000 homeless people living on the streets of LA. That’s a 75% rise in homelessness since 2012.

Former sex pistol Johnny Rotten recently complained about homeless people littering Venice Beach with feces and needles. They’re aggressive and because there are an awful lot of them together they’re gangee. He’s worried about other people being too aggressive.

Thanks to even lighter prison sentences, crime in Los Angeles County is also on the rise according to Bob Lindsey a 40-year veteran of the Los Angeles County Sheriff’s Department murders in one area he patrols were up 900 percent last year.

FBI stats also showed a 56 percent increase in murders in Los Angeles. County crime amongst the homeless population rose by 50 percent over the last year.

A nasty attack inside a Westside McDonald’s business owners Rick and Suzy and the workers down here say they see this all the time. They say every single day is a struggle and they watch the homeless people every day commit crimes and violence. It’s a standoff and it’s about to get very scary.

Residents of modern cities often complain about the loss of tradition but what could be more traditional than the return of diseases not seen since medieval times thanks to LA’s ever increasing piles of uncollected trash.

Typhus has made a spectacular comeback. Rats gorge on the trash multiply and then spread the fleas that transmit the typhus. Typhus is a third world disease caused by a breakdown in society where trash pickup becomes a luxury it’s only normally seen in socialists hell escapes like Caracas Venezuela and it’s not just the homeless who are getting typhus.

“It’s a medieval disease that’s caused by trash piles like those on Sierra’s Avenue. I thought I was gonna die!”

You were thinking Baltimore was notorious for its rats, LA is known as the city of rats. According to pest control companies, requests for rat exterminations are up 60% in the last 12 months. There are now an estimated twelve million plus rats in Los Angeles.

Pest control professionals warned of an “alarming increase in rats that is highly abnormal but they can’t properly clean up the mess because hysterical environmentalists are lobbying to get bills passed that ban effective rodenticides that kill them.

Yet another little goodie is making a comeback in LA. Bubonic plague 1.5 percent of the rats in Los Angeles are now believed to be carrying the plague. When reaching 2 percent it will start jumping to humans.

If Los Angeles doesn’t sell out its trash problem and its homeless problem, the return of bubonic plague is virtually guaranteed. What city on earth would tolerate this? The entire population is at risk. The more homeless the more crime the more trash the more rats the more disease.

If Democrats are really care about the plight of the homeless, why are they enacting policies that create and worsen poverty and homelessness? Homeless in Los Angeles where you have to earn nearly $50 an hour just to afford the median monthly rent the state’s gas tax hike trees by 40%. To a wealthy liberal living in Malibu that’s nothing to someone living from paycheck to paycheck that’s everything.

Despite raising billions from this tax 75% of LA’s homeless populations don’t have access to shelters compare that figure to just 5% who don’t in New York. And just like San Francisco lacks drug laws encouraged addicts to get trapped in a cycle of dependency.

Despite having a massive housing shortage the area has absorbed at least 1 million illegal immigrants ten percent of the nation’s total. They all seem to be finding homes a lot easier than LA’s vast homeless population. Los Angeles is also a perfect illustration of late-stage capitalism’s visceral disregard for quality of life for a modern city.

LA’s public transport system is shockingly poor which means most people travel everywhere by car and the traffic is notoriously horrendous. Los Angeles is the global leader in urban congestion worse than Delhi Beijing or anywhere on the planet.

The Texas A&M study found that sitting in traffic eats up $1,300 a year for the average Angelino in fuel prices and time wasted alone Angelino spend an average 104 hours stuck in traffic jams every single year. The smog in LA is so bad that sunsets look like nuclear bomb blasts. They also have something called “purple alert days” which means if you go outside and breathe you basically just get cancer and die.

People are fleeing Los Angeles in droves the recent breaks out of last year’s census numbers show a trend that’s hard to ignore more people are leaving than are moving in. Soaring rents and home prices have eviscerates at the middle class.

A poll found that for the first time since the 92 riots there is an increase in the number of people living in Los Angeles who fear that more civil unrest is likely within 5 years.

I asked some of my followers on Twitter who aren’t biased to all what life is like in Los Angeles and if it had changed: “I’ve been here for about 7 years. Trash increasing tents and homelessness increasing places are used to walking out virtually unwalkable. Too many illegals no one speaks English around here anymore. Things are getting worse.

I lived in LA for 20 years until I left a year ago rents a skyrocketing number of homeless is increasing dramatically as they are in Orange County I’ve never seen so many rats and needles in the streets the trash is mountainous. Not kidding!”

It’s slowly but surely becoming the city from the movie Idiocracy. It’s horrible homeless tents everywhere in the valley and all the surrounding areas as well trash drugs smell of urine all over getting worse.

Rat infested, disease ridden, cities like LA inhabited by a two caste society the elite and the sickly poor who continue to vote for their own slave masters.

“Make Sicily Great Again!”: German journalist suggests Trump to buy Sicily
How many governmental officials are there in Russia?
By Guest Writer on 08/19/2019   /   All News, Featured Stories, US   /   Leave a comment