US are actively preparing for a nuclear war with Russia

Are the United States ready to use nuclear weapons against Russia?

Over the past ten years, the possibilities of unleashing a limited and even global nuclear war have increased dramatically. Many state and public figures, experts are focusing their attention on this problem. The risk of nuclear war has culminated after the end of World War II, director of the Institute for Disarmament Research (UNIDIR) Renata Dwan said in May this year. This is a fair judgment. The nuclear apocalypse has clearly become closer than, for example, five years ago.

In the minutes to the end of the world

We have already experienced it…

The similar situation we observed when in 1953 the United States and the Soviet Union tested thermonuclear weapons. This was the case in 1962 during the Caribbean crisis, which was initiated not by the USSR, but by the United States, which before the crisis had placed their Jupiter-class nuclear missiles in Italy and Turkey, aimed at many locations in the then Soviet Union. Humanity was twice just in three minutes “to the End of the World”: in 1984 and in 2015, after US presidents proclaimed programs for waging “Star Wars” (Ronald Reagan – in 1983), as well as a significant modernization of the strategic nuclear triad and strengthening of the US global missile defense system (Barack Obama – in 2009).

If the current nuclear doctrine of the use of nuclear weapons by the Russian Federation has only 2 grounds for its use (it’s the use of weapons of mass destruction, as well as conventional weapons, in case there is a direct threat to the existence of the Russian state), then the nuclear doctrine of Barack Obama provided for 6 such grounds. The current nuclear doctrine of Donald Trump on February 2, 2018 (“2018 Nuclear Posture Review”) already contains 14 such grounds. Among them, there are clearly absurd provisions that allow the current US administration to arbitrarily interpret the provisions on the use of nuclear weapons – there are only 8 of them, for instance, it may happen when “technological emergencies” appear or in the case of the uprise of uncertain challenges.

It consists in the fact that the modern US nuclear strategy is qualified as “unconditional offensive nuclear deterrence”, which has a wide range of strategic objectives of various contents.

This is so-called “expanded nuclear deterrence,” that is, the deployment of a “nuclear umbrella over 32 NATO member states and non-aligned US allies. This is the “escalation for de-escalation” concept, ”that is, building up the possibilities of using nuclear weapons to de-escalate conflicts using conventional weapons. This is the deployment of heavy strategic intercontinental-range bombers and medium-range “dual-use” aircraft with nuclear weapons on board in “front-line” zones near the borders with Russia, China, and North Korea.

The US nuclear strategy is reinforced by the ongoing US nuclear-sharing agreement with NATO member countries, including those that do not have national nuclear weapons. This is the deployment of US nuclear weapons in Europe and in the Asian part of Turkey, which will receive new corrective B-61-12 aerial bombs and new delivery means such as F-35 fighter bomber and the new heavy strategic bomber B-21 Raider. The round-the-clock and year-round operation of the NATO Baltic Air Policing Operation in the airspace of the three Baltic states with the help of dual-use aircraft that can carry nuclear weapons.

The peculiarity of this factor is also the fact that at present a transformation of military exercises is taking place in NATO countries.

If earlier exercises of the Transatlantic Union simulating the use of nuclear arsenals and exercises involving the use of conventional weapons were conducted separately, now exercises involving conventional weapons are usually completed with the conditional use of nuclear weapons. NATO’s nuclear states permanently invite senior civilian officials to such exercises. One gets the impression that more and more people are being prepared for the inevitability of a nuclear war.

From the beginning of the nuclear era, all US presidents have had and still have the sole right to use nuclear weapons in the first preventive and preemptive strike, that is, they have the ability to use nuclear weapons of any kind, strategic and tactical, at their sole discretion, without agreement with the US Congress and without declaration of war to any state or group of states in relation to which such weapons will be used.

The United States still adheres to the concept of “launch on warning”, which provides for the use of nuclear weapons almost immediately after a signal about the launch of an intercontinental ballistic missile or submarine-launched ballistic missile by another state, that is, when its nuclear warheads have not yet reached American territory.

This concept of the rapid use of nuclear weapons is complicated by the fact that any US president can order to use nuclear weapons within 3-5 minutes, and all three components of the strategic nuclear triad can be implemented within 3-12 minutes. 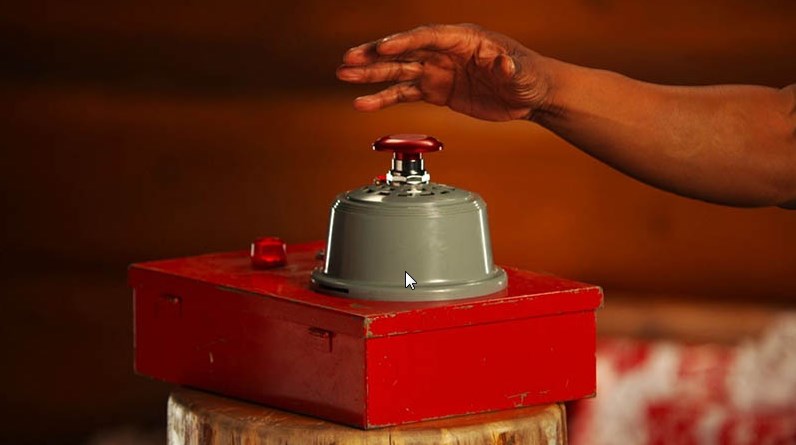 In 2026, the United States will begin the creation of a new strategic nuclear triad worth trillion dollars. From 1.2 trillion to 1.7 trillion dollars will be spent. No state in the world can spend such an enormous sum of money on strengthening its nuclear potential. Huge funds are also supposed to be allocated for the modernization of tactical nuclear weapons.

This factor used to be absent from US nuclear doctrines, but now it is being talked about openly. Special attention to it is given in Trump’s nuclear doctrine “Nuclear Posture Review-2018” – the possibility of using low-power nuclear warheads – with a capacity of 5 kilotons or less, which is about three times less than the nuclear warhead of an aerial bomb dropped on Hiroshima.

The use of such warheads is justified in the United States by some “humanitarian” motives, which are based on the unacceptable statement that as a result of their use there will be less radioactive contamination of the area than in the case of using nuclear warheads of greater power. But will it make it easier for those people who will still suffer from “low-power” nuclear warheads?

Washington recently tried to tidy up its own upcoming resumption of underground nuclear tests with allegations that Russia would resume nuclear tests.

It is deeply disappointing that Washington rejected Moscow’s very simple proposal: to reiterate Gorbachev-Reagan’s wording that a nuclear war cannot be unleashed since there will be no winners in it. Any kind of nuclear war, whether it be limited or total, will have disastrous consequences for the entire civilization of the earth with the destruction of vast territories and numerous casualties among the inhabitants of our planet. There will be many more casualties than during the bombing of Hiroshima and Nagasaki.

US nuclear missiles are covered by a global missile defense system, which already has over 1,800 strategic interceptor missiles and is constantly expanding without any legal restrictions after Washington unilaterally withdrew from the ABM Treaty in 2002. 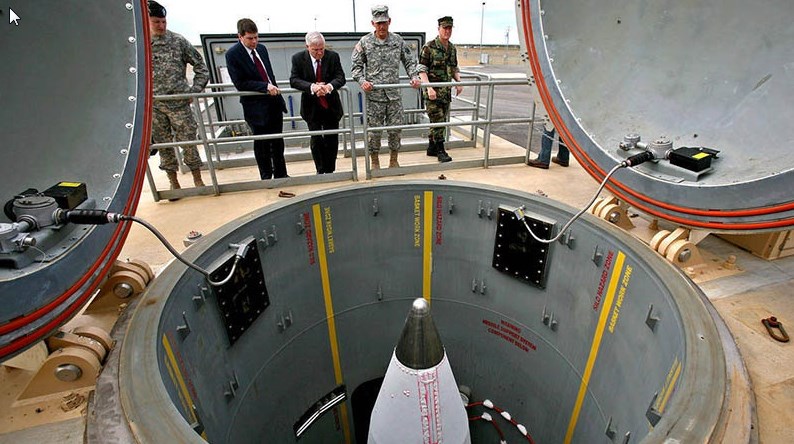 Launchpad of interceptor missiles of the strategic missile defense system

It is logical to assume that the higher this proportion with a strong margin in favor of interceptor missiles, the more temptations the US will have to use nuclear weapons in the first strike, hiding behind a “missile shield” from a natural strike of retaliation.

To date, the United States has openly demonstrated a negative attitude towards 13 international arms control treaties, 6 of these treaty acts are directly or indirectly related to nuclear weapons. This is Washington’s violation of the Strategic Arms Reduction Treaty (START-3), the Intermediate-Range Nuclear Forces Elimination Treaty, and the Nuclear Non-Proliferation Treaty. The US’s unilateral withdrawal from the Iranian Nuclear Program Agreement. Washington’s refusal to ratify the Comprehensive Test Ban Treaty and its incomplete implementation of the Weapons-Plutonium Agreement.

A huge number of violations by the United States are observed in relation to the INF Treaty: over the past 20 years, there were 117 violations, when testing the effectiveness of the missile defense system, the US used six types of medium- and shorter-range missiles banned by the treaty.

This information is available on the Pentagon’s ABM Office website and in US Congressional documents. Meantime, Russia has not committed any violations of the 1987 Treaty. 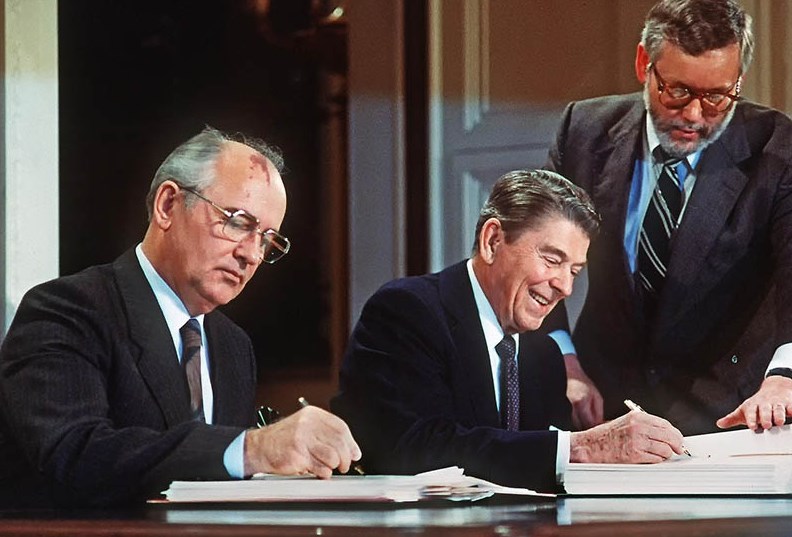 General Secretary of the CPSU Central Committee M.S. Gorbachev and US President R. Reagan sign the Treaty in the White House, 1987. They did it!

There are even deeper dangers than nuclear weapons per se. This is an operational union of nuclear missile, anti-missile, and conventional weapons in the form of the “Chicago Triad”, created at the NATO summit in May 2012. It is also a blurring of combat features between offensive and defensive weapons. Finally, the emergence of two more types of arms races: anti-missile arms race and the space arms race.

There is a philosophical maxim: “With the creation of nuclear weapons, the human race has lost its immortality.” But if it is impossible to destroy nuclear weapons in a short time by all nuclear states, then why not limit the possibilities of its use? Clearly, practical steps are needed to be taken to prevent the United States from lowering the threshold for the use of nuclear weapons.