Watchmen Series Is Undisguised Warning of Civil War in US 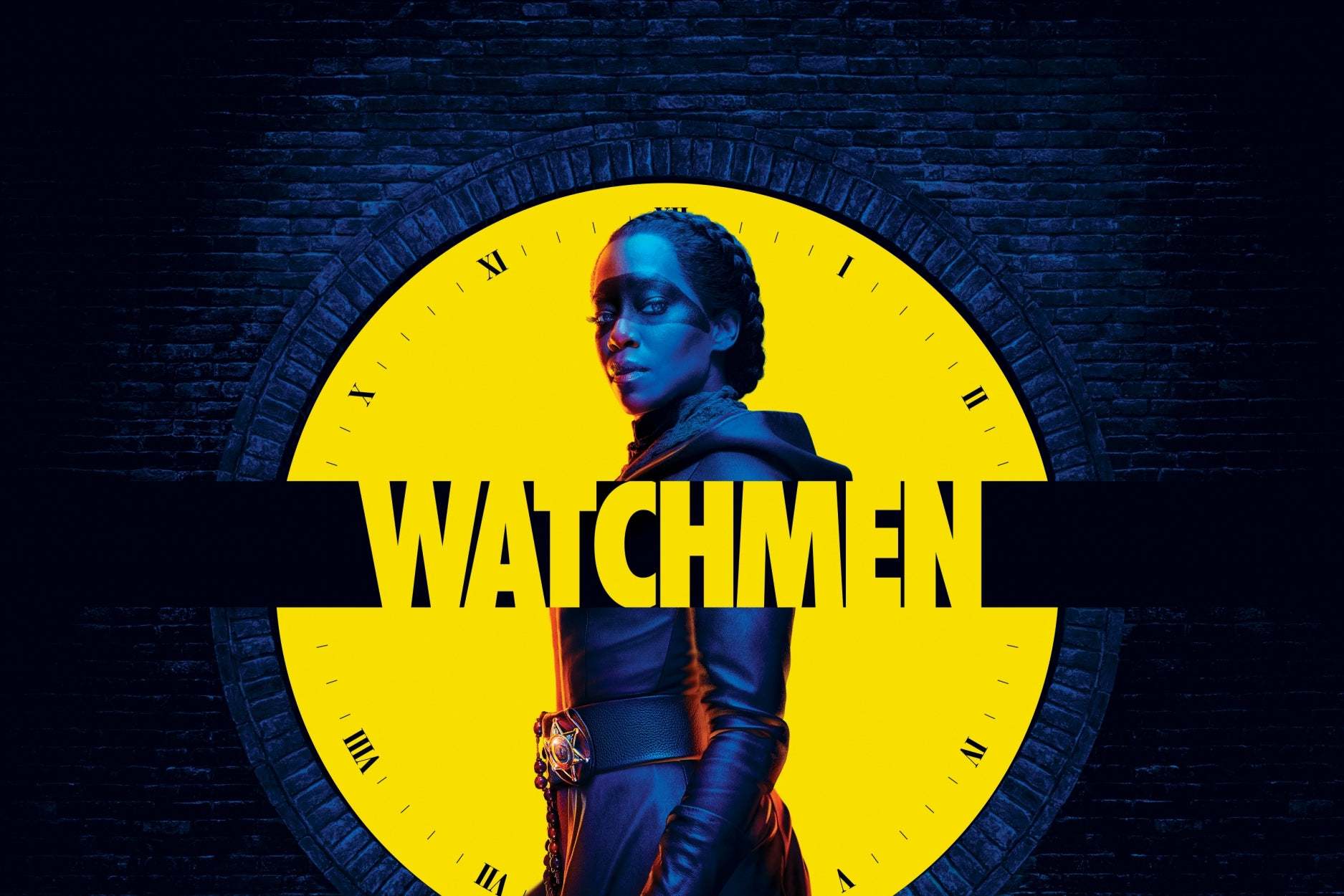 Are pop protests familiar to me? Sure. This is They Don’t Care About Us by Michael Jackson and This is America by Childish Gambino.

Did I hear any civil war warnings? Repeatedly. These are the songs “Civil War” and “No lives matter” of the band “Body Count”.

And now I can say with confidence that I saw a declaration of civil war.

The new Watchmen tv series is a clear, undisguised declaration of war.

As everyone who was interested in the history of the issue is certainly aware that in the US comic books were originally a propaganda tool. As the cartoons with Donald Duck explained to ordinary Americans that Hitler was bad, so the comics with Captain America promised them a victory over the Nazis. Therefore, it is not surprising that in this case a comic book was also chosen as a propaganda tool. To be exact, the movie adaptation of the comic book.

1. The series “Watchmen” is not a remake or continuation of the original comic strip or the movie based on it. Only the world for this story is taken as an entourage. And if the action of the original “Watchmen” takes place during the Cold War, then in this series the time of action is indicated very clearly – the year 2019, these days.
It’s an alternative world where the US won the Vietnam War, and at the same time, there are no cellular phones and the Internet (there are only pagers). The rest is a completely standalone story, a new plot.

2. The plot of the series shows the Tulsa massacre in 1921. At the time it was the most significant racist mayhem in US history. The story itself is confusing, ambiguous and extremely provocative.

To avoid allegations of bias, I quote Wikipedia:

The riot began over Memorial Day weekend after 19-year-old Dick Rowland, a black shoeshiner, was accused of assaulting Sarah Page, the 17-year-old white elevator operator of the nearby Drexel Building. He was taken into custody. A subsequent gathering of angry local whites outside the courthouse where Rowland was being held, and the spread of rumors he had been lynched, alarmed the local black population, some of whom arrived at the courthouse armed. Shots were fired and twelve people were killed: ten white and two black.[16] As news of these deaths spread throughout the city, mob violence exploded. Thousands of whites rampaged through the black neighborhood that night and the next day, killing men, women, and children[17], burning and looting stores and homes. About 10,000 black people were left homeless, and property damage amounted to more than $1.5 million in real estate and $750,000 in personal property ($32 million in 2019).

During the massacre, 36 people were officially killed (how many is actually unknown), more than 800 people were injured, more than 6 thousand blacks were arrested.
That is one of the most painful, divisive and provocative episodes in all of American history. Moreover, in a situation where it is almost impossible to establish the “right” side (everyone interprets the situation in their own way).

3. Next, come the markers. Extremely simple, purely propagandistic, and primitive:

There are two sides to the conflict.

On the one hand – liberals. They are the federal government, the “northerners” (Yankees), the police and the law are on their side. All the townspeople are having families and live in beautiful houses. They are decent, tolerant, multi-colored (Asians and Latinos, however, not noticed in the first episode), kind, talented, playing with children, go to musicals and even sing themselves. By the way, the cops without the permission of the authorities can not even pull out the weapon from the holster in their presence, because it is blocked remotely.

On the other hand, there are white supremacists. They are terrorists from the Seventh Cavalry organization (a transparent allusion to the southerners), religious, raving about the “race and its betrayal,” alt-right. Exceptionally white men, there are no women among them. All dirty, dumb, poor and vicious rednecks living in trailers, riding rusty trucks. They’re not busy with anything except making dirty bombs and fussing with weapons. 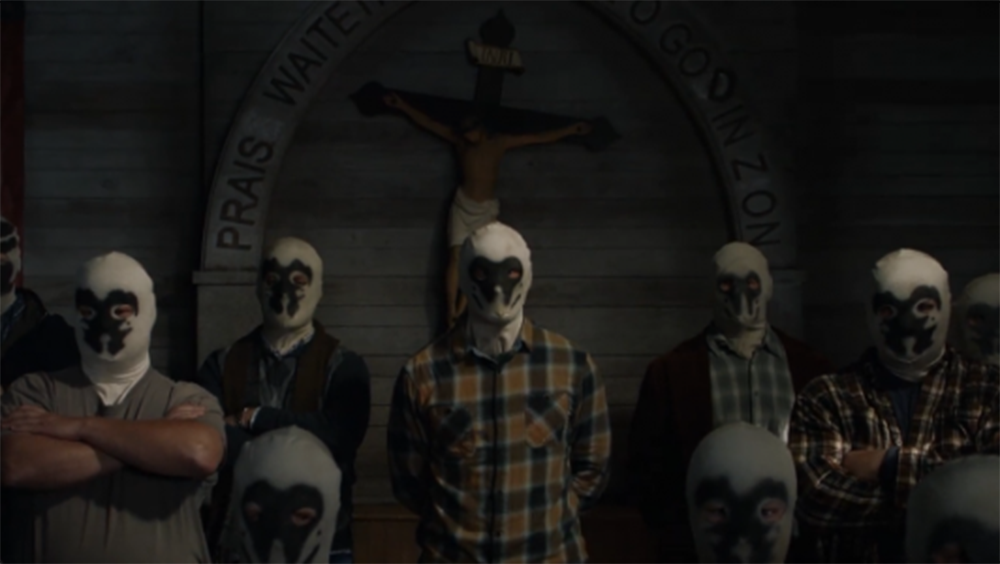 I don’t make it up, everything is clearly visible on the screenshots, and almost all the key words-labels were voiced in plain text (especially about white suprematists-terrorists, this was repeated for about fifty times).

4. Plus, “The Seventh Cavalry” wears masks of Rorschach, one of the Watchmen, who was killed in the original movie. Rorschach is a classic Vigilante, a conscious citizen, a conservative traditionalist, and patriot, hunting for maniacs, rapists and pedophiles.

When I wrote about the likely civil war in the United States, I was sometimes objected with the words “Where do you see the parties to the conflict?” Here you are they are very clearly defined!

Good liberals from the Democratic Party and evil cisgender scum, racists and terrorists supporting Trump. What is not clear?

And they killed Don Johnson! Bastards!

Clintonites vs. Trumpists – FIGHT! And if someone thinks that this is a war of ideologies, then he is mistaken – this is a war of clans. The ideology here goes only as the decoration of the conflict and a way of recruiting supporters.

And the Watchmen… Who cares about them?

US cruise missiles in Poland and Romania are aimed at Russia. Will Russia respond?
Is the Second Great Depression looming?
By Guest Writer on 10/26/2019   /   All News, Entertainment, Featured Stories, Society, TV series, US   /   Leave a comment