Why Americans hate one of their greatest presidents Richard Nixon 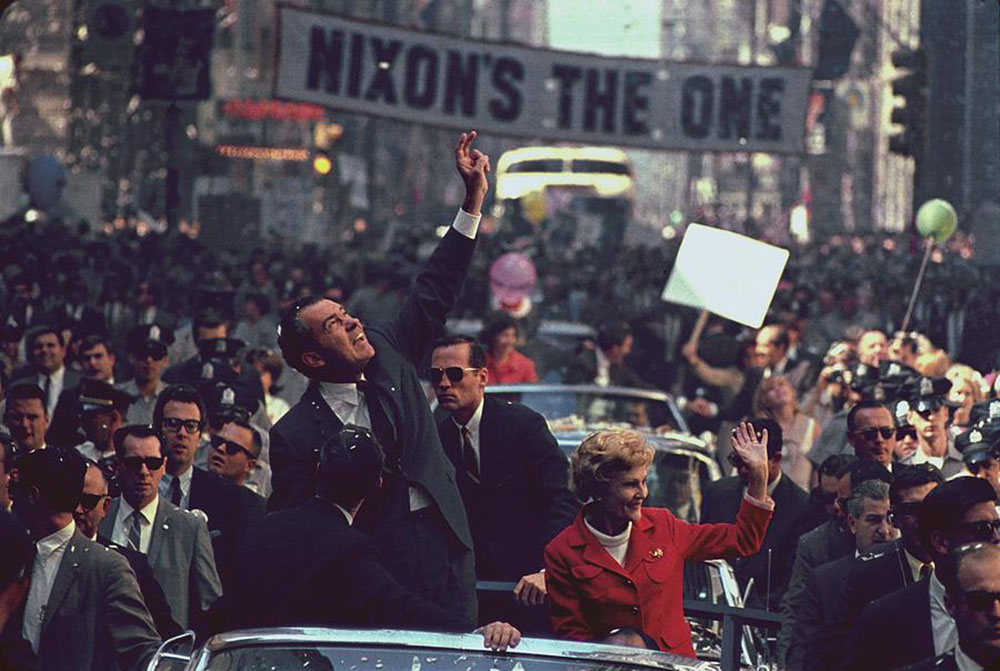 Exactly 45 years ago, Richard Nixon voluntarily resigned, becoming the first and so far the only US president with such a detail in his biography. Since then, the mass media, sometimes seriously, and sometimes jokingly, turned him into a monster and the concentration of human vices. But in essence, he is one of the most successful and effective leaders in the history of the USA. But why do they do it? The answer will surprise many of you.

Surveys about the worst leaders in the history of any country are always just pure propaganda, not sociology.

Professional historians have their own consensus – they consider James Buchanan Jr. the worst president, who led the country to a civil war. But the American people are too far from professional historians and from Buchanan. If you go out directly to the people with the mic, the people will say – Nixon, is the worst president. People are so ungrateful.

Once again: the worst is not the executioner of the Indians Jackson, not a meaningless drunkard and a womanizer Harding, not Hoover, who made people starve in the times of Great Depression for purely ideological reasons, but Richard Nixon – a man of outstanding career and industry, who became one of the most effective presidents in history of the USA. 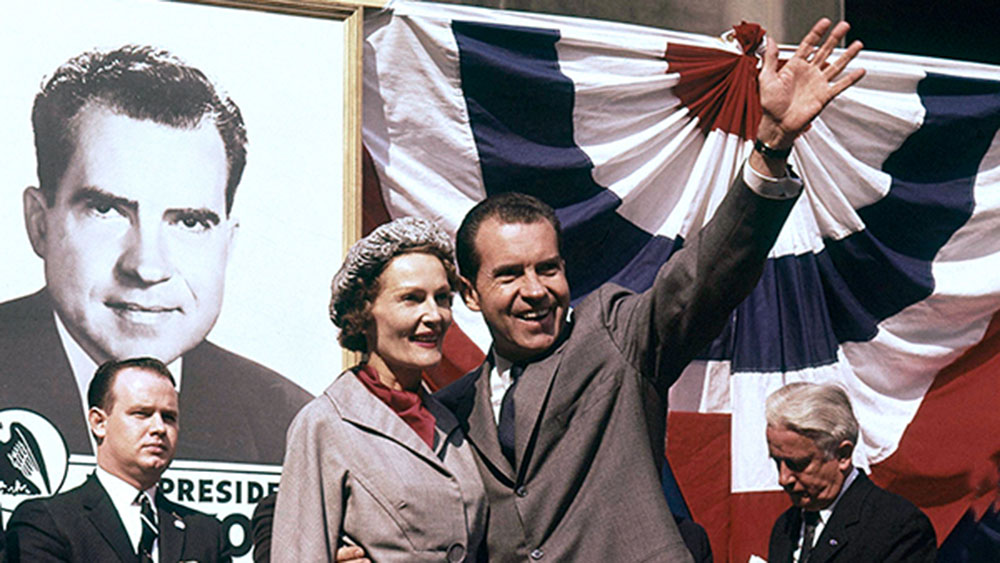 More precisely, not even Nixon, but “Tricky Dick” as he is usually called in the press. Richard’s “diminutive” is, of course, Dick. But where we hear an almost respectful “nickname”, equally suitable for a gangster and politician, an expert in American slang will read something else.

It seems impossible to break the public consensus that Nixon is burning in hell side by side with Hitler.

Meanwhile, he was the true embodiment of the “American dream” – one of the few presidents who did not belong to the elite by birthright, but climbed out of the mud to riches, even if it was Californian mud. The bankrupt farmer, the owner of a gas station, named his son royally – Richard (in honor of the Lionheart), but could only pay for the provincial college for the honor-roll student.

All the rest, an unprepossessing-looking man, completely lacking charisma, achieved himself, whether it be marriage or career. He volunteered for the Second World War, already being a successful lawyer. As a result, he sat it out in the rear on a Navy base – not because he was a coward, but because of his commanding talent: as a tough and efficient organizer “on the shore”, Nixon was much more useful than on the front lines in Japan.

Having got into politics almost by accident, he floored an experienced heavyweight and handsome Jeremiah Voorhis – the author of Foreign Agent Law, the analog of which adopted in Russia forty years later caused hysteria in the State Department. And when he became vice president under the war hero Eisenhower, he periodically (sometimes for months) replaced the elderly veteran at the firing lines: a trip to Moscow and “The Kitchen Debate” with Khrushchev in Sokolniki. 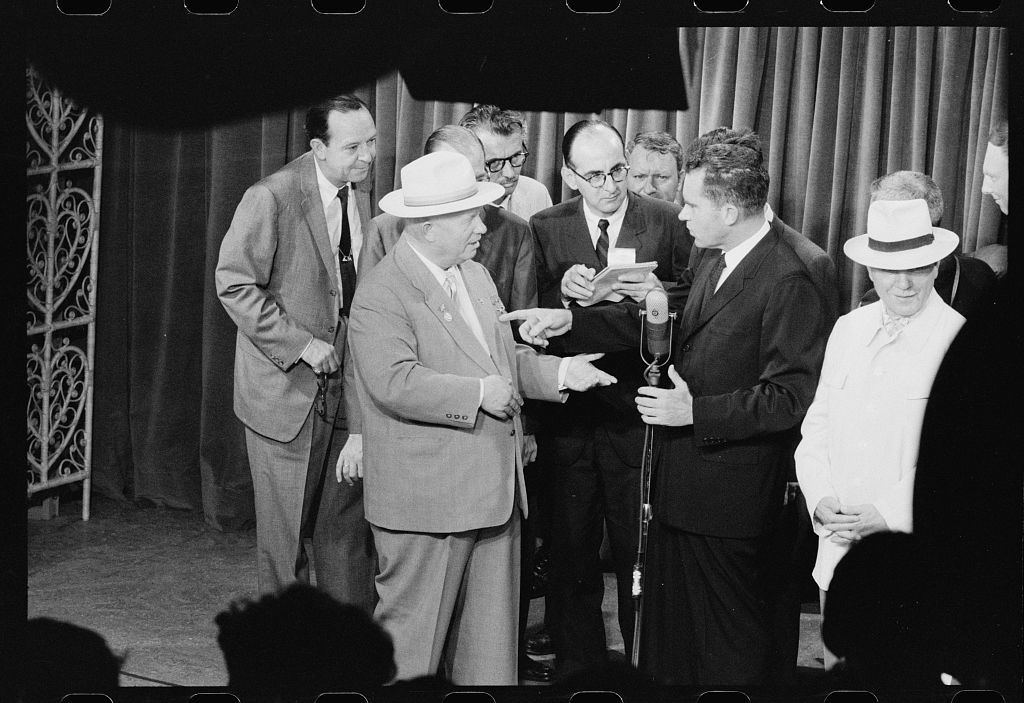 American reaction to the “Debate” was mixed. The New York Times called it “an exchange that emphasized the gulf between east and west but had little bearing on the substantive issue” and portrayed it as a political stunt. The Times also declared that public opinion seemed divided after the debates. Time Magazine, on the other hand, praised Nixon, saying that he “managed in a unique way to personify a national character proud of a peaceful accomplishment, sure of its way of life, confident of its power under threat.”

Nixon gained popularity because of the informal nature of the exchange, improving upon the lukewarm reception that he previously had with the American public. He also impressed Khrushchev, according to William Safire. “The shrewd Khrushchev came away from his personal duel of words with Nixon persuaded that the advocate of capitalism was not just tough-minded but strong-willed.”

The trip raised Nixon’s profile as a public statesman, greatly improving his chances of receiving the Republican presidential nomination the following year.

By the way, two political antagonists – Khrushchev and Nixon – have something in common.

Having denied love to both, the two nations – American and post-Soviet – do not associate their names with victories in the space race: in national Soviet memory, Gagarin is separated from the Secretary-General Khrushchev just like Armstrong is separated from the “Tricky Dick”. And that’s pretty unfair in both cases.

In fact, Nixon has a long list of merits.

It was Nixon who averted the threat of a nuclear apocalypse and the fear that Soviet submarines would emerge in the Mississippi Delta. As a principled anti-communist, he established relations with Maoist China, launched a policy of detente with the USSR and signed the first strategic arms limitation treaty.

It was Nixon who saved the country from default and debt shame by killing the Bretton Woods financial system with a few impudent blows when the US gold reserves could no longer provide the dollar as a world reserve currency.

It was Nixon who discouraged the Americans from absorbing dangerous stuff and saved them from many accidents at home, introducing Consumer Product Safety Commission, which contradicted (as it seemed at the time) the republican principles of the free market.

It was Nixon who made environmental protection a government concern. The army of leftists and environmental activists, who are calling to breathe less so as not to heat the planet with carbon, do not even remember that. 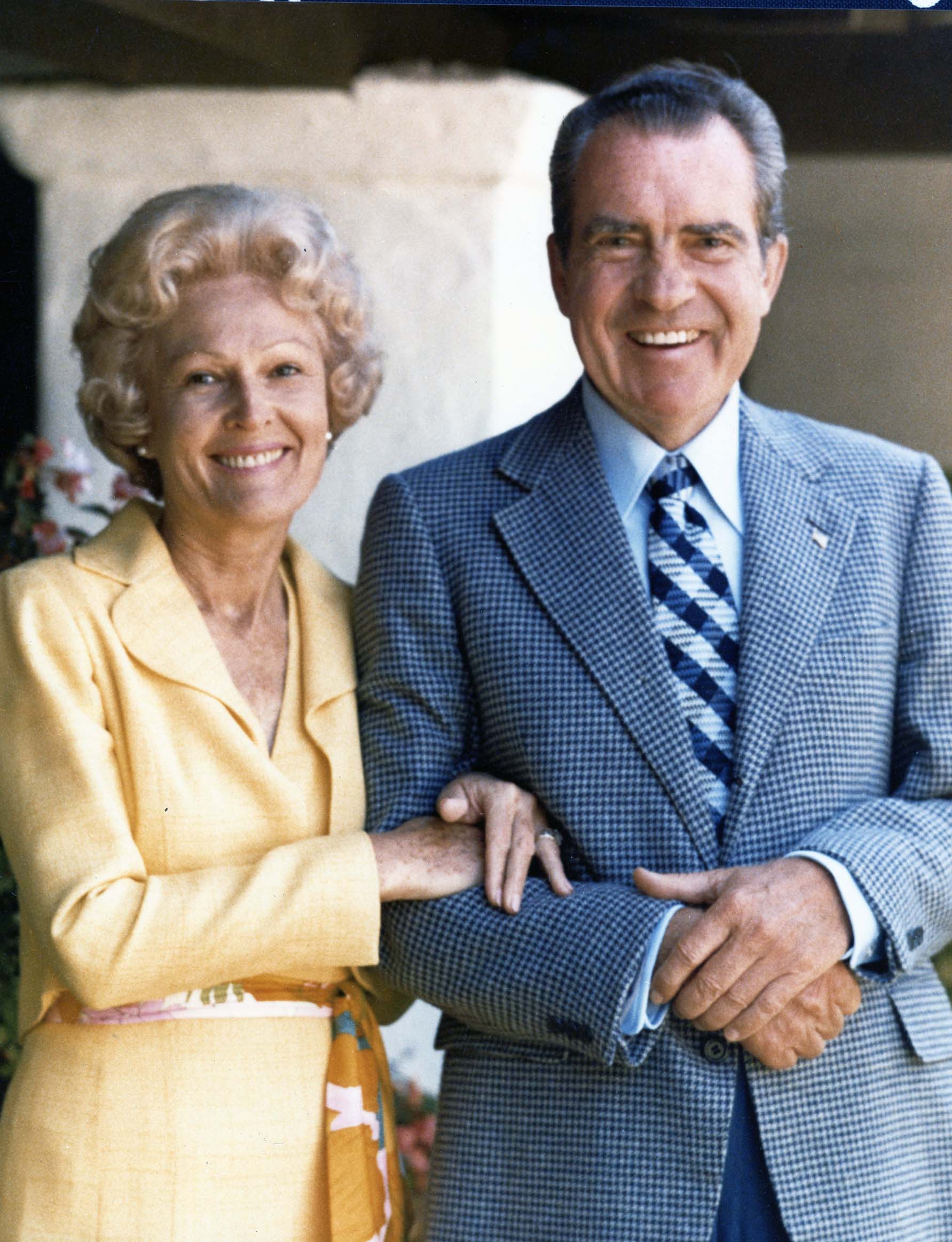 It was Nixon who pulled the United States out of the Vietnamese meat grinder, into which they were drawn by the “peace-loving” Democrats. And when he got involved in a Cambodian military campaign, he backpedaled it just two months later, that is, he managed to admit his mistake which is an invaluable advantage for a politician.

Finally, he really loved his country, which he traveled far and wide, although he made the impression of a “pencil pusher”. For this, he was bestowed, which is a rare case in the USA, a second chance for a battle in the presidential elections. Usually, if you lose, then you lose – no one likes losers. But Nixon, defeated by Kennedy in 1960, skillfully took revenge in 1968, promising to put an end to the mess that was going on in the country – and, actually, he put an end to it.

It is also important that he lost Kennedy for the most unfair and offensive reason you can think of: he wasn’t handsome enough. Those Americans who followed the debate on the radio favored Nixon – as more intelligent. However, in 1960, for the first time television became the main US election platform, and Kennedy, a Hollywood fellow, pulled out decisive female voices for the Democratic Party with his snow-white teeth. Others gave up after such defeat, while Nixon wrote the book “Six Crises” and in a simple, layman’s terms told the nation about his failures, even deeply touching the Oregon lumberjacks.

When re-elected in 1972, as it turned out, he had no competitors at all. Despite the fact that the Watergate scandal has already begun, Mr. President defeated the liberal slobber McGovern receiving 520 electoral votes. As a percentage of 60,7 to 37,5. Concerning percentage points, this record could not be beaten by Ronald Reagan himself – the recognized idol of the nation.

But for some reason “All the President’s Men” began to wiretap the headquarters of the obvious underdog candidate McGovern. Nixon got busted trying to hinder the investigation of this stupidity, resigning at the time when impeachment was already inevitable. Because, oh my God! – Mr. President lied! 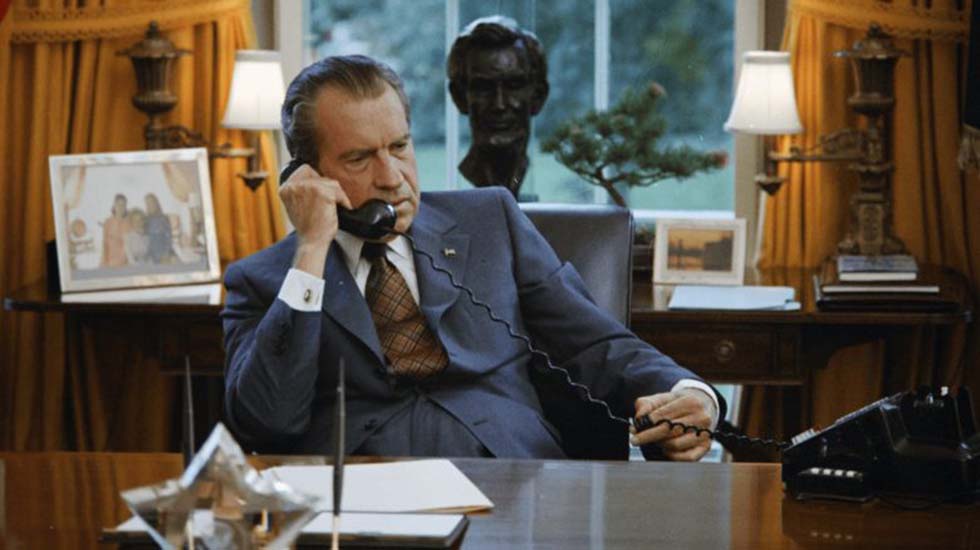 In Russia for instance, it may seem strange and even mocking, but a social contract in the USA categorically requires personal honesty from its politicians. If the Russians, having survived the USSR and the “tumultuous 90s,” perceive lies as a natural property of the ruling party, then in the US it is a heinous crime comparable to tax evasion.

In international politics, for the principle of personal honesty, an exception is made akin to what is accepted in Islamic law: a Muslim should not lie to a Muslim, but it’s ok to lie to infidels. For the glory of the nation you can say whatever you want abroad, but among sequoias and cornfields, fertilized with the blood of patriots, do not lie, it’s an abomination in the sight of God.

Even those Americans who have no particular illusions about the “Washington swamp” are offended in their best feelings if they suddenly find themselves in the place of an infidel with noodles on their ears.

A significant part of hatred towards Trump is based on regular lies. When you read something on Twitter and then claim it to be a proven fact. If a democrat is not drunk, not on the floor and not in the heat of the holy struggle, he is able to admit it. But Nixon lied consciously, trying to cover up the stupidity of his team, he now has no forgiveness.

Nixon’s total demonization was consolidated by the media and Hollywood. The former president didn’t even need to appear on the screen with the whole body – for the image of the cynical manipulator, the indicated presence was enough. 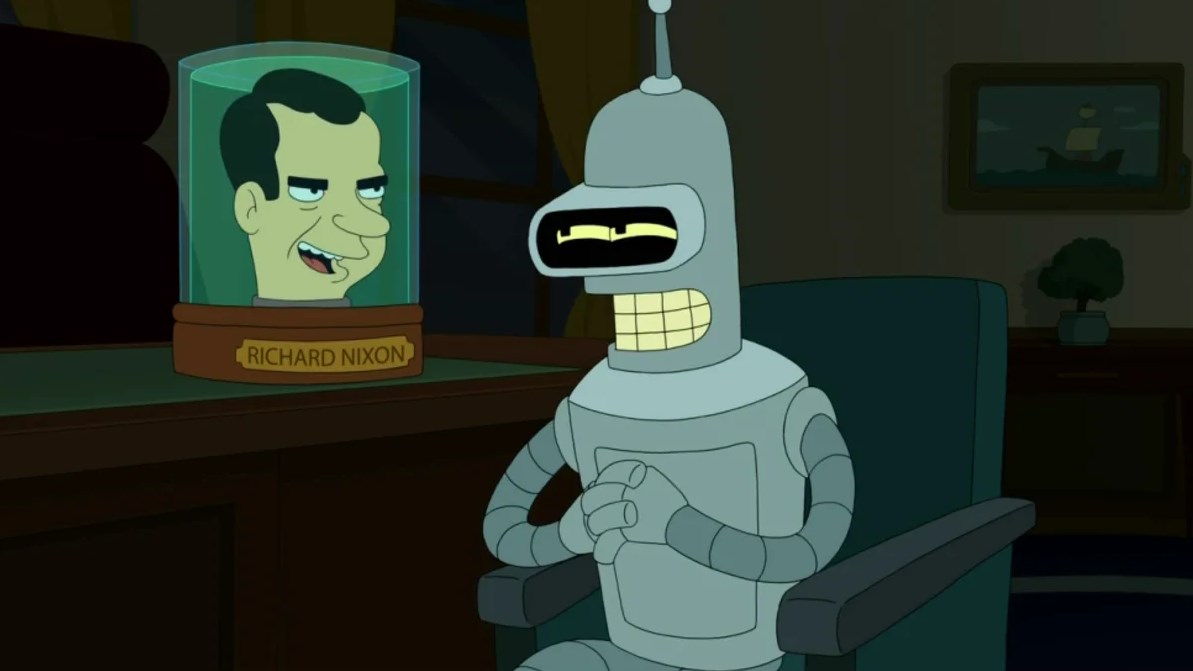 In modern culture, Nixon is the personification of a deceitful and vile politician

The creators of the satirical Futurama, on the contrary, were satisfied with the head separated from the body, turning alcoholic Nixon into a permanent antagonist for several seasons. It is foolish to call it a satire, but Alan Moore in The Watchmen with all seriousness describes Nixon as a dictator who leads the country towards a nuclear war with the USSR. It’s no longer a satire, but sheer madness.

Only Ron Howard in his “Frost/Nixon” drama film tried to rethink the image of the 37th president, as the worst of the worst, convincingly showing how worthless and small were Nixon’s successors in comparison to him. Although it is already useless. Nixon is not a subject to rehabilitation.

He cannot be forgiven for avoiding responsibility thanks to a pardon from President Ford – Ford himself later admitted that this move cost him re-election. This disagrees with the Americans’ view of national justice because the political star of Nixon himself rose at the very time when he, being a lawyer, caught diplomat Alger Hiss in a lie, who was eventually sentenced for perjury to five years in prison.

Modern researchers believe that Hiss was a Soviet spy. They recognize both Nixon’s administrative talents and his tremendous successes in foreign policy, albeit attributing some of them to Henry Kissinger. But ordinary Americans are stone-deaf.